We care about our tenants and take pride in maintaining our buildings and properties.

We aim to provide value and quality service. 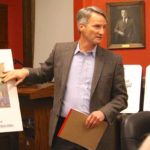 Locatelli Properties was founded by my great grandfather, John E. Locatelli who came to America from Italy in the early 1900s. When he first arrived in this country, John was a mason, working long hours, living paycheck to paycheck. After several years, he became a building superintendent overseeing construction jobs, and eventually he became a builder and a property owner.

My grandfather, Albert J. Locatelli followed in his father’s footsteps and helped build several apartment buildings and also several well-known movie theaters in Arlington and Somerville Massachusetts. These theaters were featured in a museum exhibition, “The lost Theaters of Somerville.” The exhibition was created by a professor at Tufts University. Albert J. Locatelli developed several distinctive retail properties in Belmont, Winchester, and Dedham Massachusetts, and he was ahead of his time in promoting mixed used buildings in downtown settings. These buildings maintain their unique architectural details today.

Locatelli Properties today is a full service management and development company with properties in Belmont, Winchester, Dedham, and Somerville, Massachusetts. Our offices are located in Belmont Center, at 67 Leonard Street.

Login required for member only features.